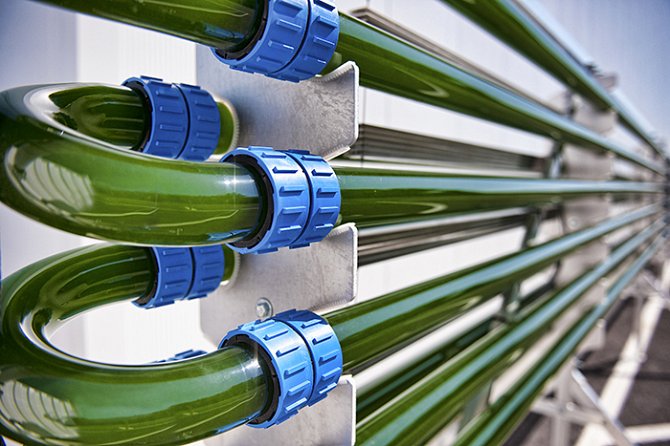 
Algae [al-jee]: plural noun, any of numerous groups of chlorophyll-containing, mainly aquatic eukaryotic organisms, distinguished from plants by the absence of true roots, stems, and leaves and by a lack of non-reproductive cells in the reproductive structures. Algal [al-goal]: adjective, pertaining to algae.

Joel Agner, Daniel Sellars, and Dan Wells are proof of the growth opportunities available at Honda R&D Americas, LLC (HRA). Only, they didn’t follow the associates who have gone on to become division directors, project leaders, and even president (at least not yet). They cultivated a different path: They became farmers. And in doing so, they’re growing a greener, cleaner future for Honda.

In May 2018, Agner, Sellars, and Wells installed Honda’s first-ever algal farm, onsite at HRA’s Ohio Center, in which the building’s CO2 is used to grow algae that can then be converted into new energy and other valuable products.

“We saw an opportunity to convert waste streams into something useful,” Agner said. “That led us to propose the algae project.”

It was another plant-based product from years prior, however, that ultimately led Agner and Sellars to their interest in and advocacy for algae: vegetable oil.

Eight years ago, in addition to being Powersports engineers, Agner and Sellars discovered they had a shared passion for alternative energy. That’s why, in 2010, the pair started making their own biodiesel—by filtering french fries, chicken wings, and other pieces of food out of the vegetable oil used in HRA’s cafeteria and converting it in their homemade processor. By 2012, they were looking beyond that biodiesel hobby toward their dream of scalable, alternative means for clean energy, particularly ones that reduce and recycle CO2.

Around that same time, the duo learned about the energy opportunities in algae—not just its benefits in capturing CO2 but in processing it as well—during their research of CO2 reduction methods.

“Through photosynthesis, algae uses the power of sunlight and waterborne nutrients to store the carbon from CO2 and release the oxygen,” Sellars explained. “That byproduct, or biomass, can then be engineered into fuels, soil conditioners, plastic, or anything else made from oil.”

In algae, they had their goal, now they needed CO2 to get the process started. For that, they looked to Dan Wells from HRA’s Facilities Department. 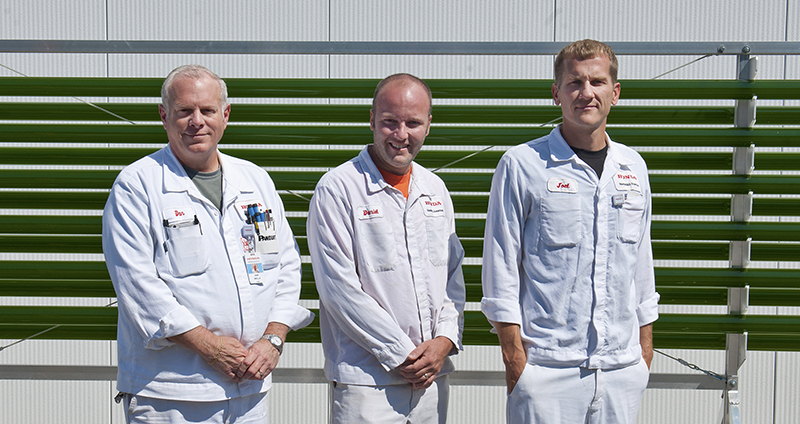 (Left to right) Dan Wells, Daniel Sellars, and Joel Agner in front of their farm.

Early in the project’s development, Agner and Sellars knew they needed someone with building expertise to help construct their farm on site. That led them to Wells, who would oversee the project’s structural components and incorporation into the Ohio Center’s overall site plans. He also identified where they could get the CO2.

“In the Honda spirit of ‘sangen shugi,’ or ‘going to the spot,’ we decided to look at a major source of CO2 – exhaust from our engine and transmission test cells,” Wells said, referring to the “dynos,” or dynamometers, used for vehicle testing.

Because they needed a large source of CO2, their original plan was to house the algal farm on the roof of a dyno test building—closest to the building’s CO2 exhaust flue. However, when that location wasn’t available in the short-term, ever the challenging spirits, Agner, Sellars, and Wells came up with a countermeasure using a carbon-neutral diesel generator.

That generator, placed at ground-level, would draw CO2 from the roof’s dyno exhaust flue into its combustion chamber. A nearby compressor—also powered by the generator—then captures and stores the generator’s exhaust and injects it into the algal system, also on the ground.

Where does the generator get its power? Not diesel fuel but, rather, the waste vegetable oil from HRA’s cafeteria.

“Using discarded vegetable oil was another opportunity for us to show true waste-to-energy and electricity generation from plant-based fuel,” Agner said. “Because we capture the exhaust and feed it to the algae, there is no carbon penalty associated with the generator’s combustion.”

In addition to storing up CO2, the generator also charges a Honda Fit electric vehicle, which provides a full day’s worth of power for running the algal system.

The process is representative of Honda’s global “Triple Zero” initiative to emit zero CO2, achieve zero waste to landfill, and ensure zero risk to energy security. To maximize their project’s Triple Zero potential, Agner and Sellars sought the advice of a place known for its algae research: Ohio University. And from there, a partnership formed and rapidly grew—even to the point of receiving funding support from other sources.

“We received a $200,000 grant from the Ohio Water Development Authority (OWDA) to explore how we can grow algae using waste water and extract energy and other products from the biomass,” said Agner, who went before the OWDA board with Sellars, and received assistance from Ohio University, to make the proposal. “The grant will support an Ohio University student who will contribute to the program as well as the university’s algae lab work.”

That work at Ohio University will be led by Dr. David Bayless, a leading expert on cultivating algae. Agner and Sellars “cold called” Bayless early on in their project after being referred to him by a local partner.

“They are really remarkable guys,” Bayless said of Agner and Sellars. “For them to be doing this, while having full-time jobs, is so impressive. There were so many hurdles they had to overcome, and they kept a laser-like focus and determination the whole time.”

Bayless’s focus, meanwhile, will be on the nutrients needed to sustainably grow the algae, specifically looking at opportunities from wastewater.

“The big problem in making algae commercial is the fertilizer you need to grow it,” Bayless advised, noting that fertilizer itself costs money and energy to produce. “By using what would normally be a pollutant, we can not only reduce wastewater’s negative environmental impact but also improve the sustainability and cost of algal systems.”

Through Bayless’s research, Agner, Sellars, and Wells hope to create a modular algal system for other Honda sites to employ and make it more automated so that it can work on its own. 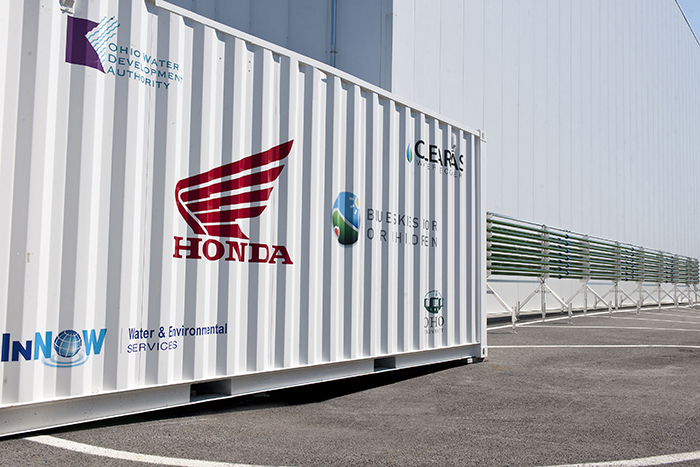 “We need to make sure this isn’t just applicable here,” Sellars added. “It needs to be modular, scalable, reliable, and repeatable.”

It’s another challenge the team is ready to take on, with Honda’s support.

“It’s a testament to the vision of this company,” Agner said, “that associates can get executive support for unconventional ideas like this.”

And indeed they are. In May, global Honda leadership saw the algal farm after the seeding inoculation took place. Already, the amount grown is doubling per day, and the extracted algae is now being studied by Bayless at Ohio University.

“For me, this is beyond exciting,” Bayless said. “To my knowledge, this is really the first company-driven algal-based remediation program. For Honda to embrace this shows that this can be done and that there is a positive future for this field.”

Which is why Agner, Sellars, and Wells will continue exploring opportunities to make their algal farm a permanent fixture at HRA’s Ohio Center. That includes moving the farm to the roof as originally planned and using waste heat for a future greenhouse, allowing the system to operate year round. 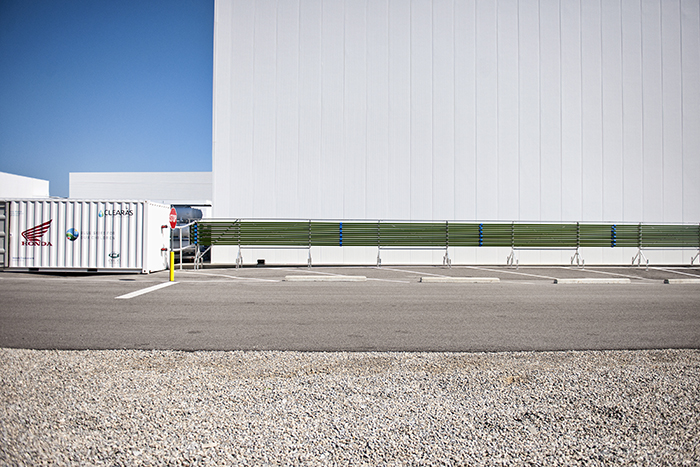 “Through this we’ve found all kinds of other technology and ideas that could be implemented, including ones that would feed directly into our algal system,” Sellars said. “This is just the tip of the iceberg with this technology.”

“Our dream,” Agner added, “is to help Honda develop a ‘Triple Zero’ roadmap, with algae being just one of many needed strategies.”

They’re certainly off to a great start. The seeds have been planted, both in their algal farm and in the hearts and minds of their colleagues and partners.

Now comes the growth, of the algae, the energy uses, and the potential availability at other Honda locations. And for that, Honda will continue looking to its first-ever algae farmers.